The Drenthe municipality of De Wolden is planning to increase the tourist industry in the country. Farmers of the community are looking for extra income. They have found one another in De Wolden à la carte.
Tekst: Janine Hoekstein

The municipality of De Wolden is a rural community in southwest Drenthe between Meppel and Hoogeveen measuring 22,700 hectares, with 17 settlements and a population of around 24,000. The main economic pillars are agriculture, recreation and tourism, as well as some small-scale industries and retail trade. Tourism and recreation are spearheads of the municipality of De Wolden. Activities from these areas provide income for the population and give a buzz to the 17 hamlets and settlements. Attracting big companies is also an option, of course, but the regional council decided against it. ‘Tourism and recreation are very strong sectors indeed,’ says Willem Visser, coordinator of the municipal Town and Country Planning. ‘Some 150 companies are already involved.’ After the council has been sitting on new developments for several years, a number of things coincide. Firstly there are the results of a study on rural communities conducted by Wageningen University. The results show that two-thirds of the farmers would like to expand and seek another source of income. Secondly, at that time the ‘Ruinerwold Run’ comes knocking on Visser’s door: they want more support. Tourist operators in Ruinerwold have been organising the annual ‘Christmas Run’ for several times. Visitors are invited to take part in a run along the participating businesses, such as a museum, an antique shop and a shoeing forge, which are all welcoming the guests. Visser: ‘It was clear. The farmers were looking for something, the municipality was looking at increasing the tourist numbers: we were going to work together.’ The working group ‘Rondje de Wolden’ emerged.

Bookings made via the web site

Around one hundred small-scale attractions appeared to be operating in the area. These operators are too small by themselves, but together they represent a sizable tourist attraction. However, many operators did not know one another. Our aim was for people to get acquainted so they could make a living together. The ‘getting to know one another’ is working. Collaboration is also a success. ‘The result was establishing a foundation to continue further collaboration. But that was not all. That’s when the web site came into the picture,’ Visser continues. ‘The idea was for visitors to put their own programme together via the web site. Putting together a programme is just a matter of a few mouse clicks; people can also see which business is open or closed.’ There is a great variety of businesses, such as a goat farm, a biofarm, a trout hatchery, a barrel organ museum, a tin foundry and a hut made of sods. Among the participants are many camping sites, hotels and bed & breakfast places, as well as many restaurants. The Leader contribution has been very important for producing the web site. The entire project was budgeted at € 100,000. The municipal contribution amounts to € 25,000, the province takes part for € 10,000 and the LEADER+ subsidy is € 35,000. For the remaining € 30,000 a company buys the web site. ‘The money is spent on more than producing the web site alone,’ says Visser. ‘Expenses included matters such as advertising and informing the operators. Some operators had to be instructed on the basics of the Internet. The web site must also be maintained.’ The web site was launched in May 2007.

A taste of De Wolden

The idea is great, collaboration between the participating businesses is excellent, but the implementation could be refined further. Setting up a web site is one thing. Keeping the web site up-to-date is quite something else. ‘The idea of ”it’s free of charge, so I don’t have to do anything about it” is also playing a role,’ Visser admits. ‘After all, the Council will take care of it, won’t they? But the Council will not take care of everything all the time, of course.’ It also appeared the operators were shy to quote any prices. ‘The web site had many hits, but the number of bookings was disappointing.’ That is a point of particular interest. Collaboration results in the idea of offering ”letter boxes” on the web site, walking and cycling routes for groups of people who try and find their way with the help of cryptic descriptions. Routes are available for various villages, but a trip from one village to the next is another option. The web site also offers package deals such as ”A Taste of De Wolden”, where visitors follow a trail of wineries and teagardens. Other deals include visits to museums and galleries or to historic farmhouses and monuments, and another package includes walking and horse-riding. Visser is happy with the results. He understands that some people may ask why this should be a task undertaken by the Council. ‘We are a rural community of farmers, some retail trade, some small businesses, and for the rest we live of recreation and tourism. This is a way of getting the rural community on the move. That is the reason why we believe in the importance of Council interest. We want to keep the activities going. If we are able to stimulate a lively community, we are happy to make a contribution.’

The match to light the fire

As coordinator for the Council, Visser is close to the fire and knows about the existence of LEADER+, of course. ‘It is my job,’ he says. ‘I am the middleman between the citizens and the subsidy sources. I am able to see the way in which plans should be shaped to qualify for subsidy. LEADER+ takes care of around one-third of the amount. It is a booster. Both the province and the regional Council must also subsidise the plan. But funding from Leader will persuade other providers of subsidies a little faster.’ Visser believes the project has been accepted because it is a bottom-up project. ‘The good thing about it is the fact that it comes from the business owners themselves. The Council has not told anyone what they should do.’ Another trump card is to have existing initiatives connected, rather than starting something from scratch. Visser is convinced the project would have failed without LEADER+. ‘It was the match to light the fire.’
The web site is running, the business people have been linked to one another. End of a success story?
‘It needs some further development,’ Visser admits. ‘In particular work needs to be done on promotion. We are not sticking out from the rest, here in the north of the country. Drenthe has been too modest for too long; we have been leaning backward and saw the tourists discover areas such as Twente and Zeeland. We now counted 550,000 overnight stays a year in De Wolden. We’d like to see that figure grow to 700,000. The Dwingelderveld, just outside the borders of our municipality, is drawing many tourists. We should be able to get a piece of that pie. Does the project meet all expectations… well, not quite. The collaboration is unexpectedly good, but more work needs to be done to the site. Let me say, we succeeded for 75%. The project will be carried on, of course. The site must be going for at least five years. A business has taken over the web site; the entrepreneurs will have to pay a contribution. The Council is sitting on the fence.’
He is in no doubt that the project has been very useful. The collaboration it achieved is enormously in our favour. Visser has also been invited to tell his story at other places. ‘We cannot copy the project, but we can certainly show how things are done.’

At www.vrijetijdsidee.nl visitors will be able to see what De Wolden has on offer in the form of tourist attractions. Interesting outings can be placed on an agenda to make a full day programme. Bookings for accommodation and events, as well as the Letterbox game, can be made on the web site. The attractions range from antique shops, ateliers, a goat farm, a biofarm, a tearoom, camping sites, hotels, a hut made of sods, to visiting a farm with vineyard, a windmill, an estate shop, a trout hatchery, a barrel organ museum, and a tin foundry. 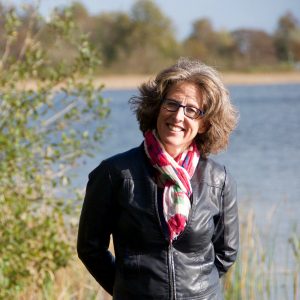